There are 21 species of armadillo, according to the Integrated Taxonomic Information System (ITIS). Some armadillos are very small, while others are huge. The smallest is the pink fairy armadillo, which is about 6 inches (15 centimeters) long. Giant armadillos are the largest species, and are about 5 feet (1.5 meters) long, according to National Geographic. An armadillo’s armor is made up of overlapping plates covering the back, head, legs and tail. The number of armored bands identifies the different species, according to the San Diego Zoo. Only one species, the three-banded armadillo, can roll itself into a hard armored ball to defend itself against predators. Other armadillo species simply dig a hole quickly and hunker down so that their tender stomach is protected and their armor is the only thing visible.

Most armadillos stick to areas closer to the equator because they like temperate to warm areas due to their lack of fat stores. According to the Internet Center for Wildlife Damage Management, armadillos are very picky about where they live based on what type of soil is found in the area. Usually, armadillos prefer sandy or loam soils that are loose and porous. This makes digging for food and creating burrows easier.

Armadillos are not social creatures and spend most of their time sleeping. They usually sleep up to 16 hours each day in burrows, according to National Geographic. During the morning and evenings, they forage for food.

Armadillos are omnivores, which means they eat meat and plants, though 90 percent of an armadillo’s diet is made up of insects and larvae, according to the Internet Center for Wildlife Damage Management. With their long, sticky tongue, armadillos catch ants, beetles, termites and other insects after digging them out of the ground. They also eat plants, eggs, small vertebrates and some fruit. From time to time, they will scavenge for dead animals. Source 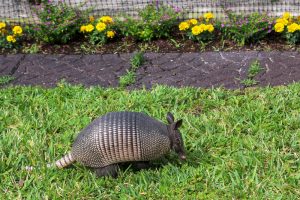