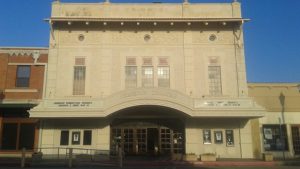 Conroe Mayor Harry M. Crighton sold his drugstore when oil was found in Montgomery County in 1934 and went into the oil industry. His wish for a grand theater was inspired by his success in the oil industry and his civic pride. He employed architect Blum E. Hester in 1934 to create a movie palace close to the great Houston Majestic Theatre using a native stone like that of Austin’s capital.

Tickets for adults at 50 cents and for children at 25 cents. In order to accommodate vaudeville shows, the construction of Hester required scenery to be placed over the stage in 40 feet of space. Vaudeville was, however on the decline and this style of entertainment was never hosted by the Crighton.

During the hot Texas summers, air conditioning made the Crighton extraordinarily famous. The Crighton had flourished for many years, but the audience became smaller as the drive-in theaters and new wide-screen theaters became popular. In the mid-sixties, the Crighton Theatre was eventually closed.

Donating The Theatre to the County

In 1976, the founders of the Crighton Theatre, Frank and Hallie Crighton Guthrie, started considering the idea of donating the theater to the County. After debating the proposal with their financial administrator, Chuck Stealey, they invited Stealey to introduce the plan to Bruce Scott, then president of the Chamber of Commerce of Conroe.

The only conditions of the Guthries were that the name of Crighton be kept, that the theatre be exclusively used for performing arts, and that the resident theatre company be the Little Theatre of Conroe. The Montgomery County Foundation for the Performing Arts (The Crighton Theatre Foundation) was established on behalf of the citizens of Montgomery County to recognize the donation of the old Crighton Theatre.

The concerned parties were surprised at the state of the building when visiting the site and also asked if it would be worth attempting to renovate. Stagnant water, dead pigeons, rats, garbage, and litter flooded the orchestra pit. The once stunning frescoes were coated with a material for soundproofing. In the lobby, the beautiful tiled floor was destroyed and much of the artwork in plaster was chipped and broken. But all were persuaded, due to the imagination of architect Harry Devlin, that the theatre could be returned to its original grandeur.

The huge challenge of raising the $500,000 required for the renovation was taken on by Rigby Owen. Conroe’s Little Theater contributed $20,000 for the original building and $25,000 to pay off the debt. Each of the three Conroe banks made additional promises of $ 15,000; Allied Conroe Bank, First National Bank, and First Federal Bank, and a donation of $ 30,000 from Panorama residents persuaded Owen that the target could be accomplished.

The new Walden Country Club provided its equipment and services at no charge to entertain Peter Duchin and his orchestra to host a large fundraising function. Guests who were professionally attired were invited to open their purses generously. About $250,000 was promised at the first count. The guests were asked by Owen to dig a little deeper. At the end of the evening, recalling their wonderful and nostalgic evenings spent at the old theater with friends and loved ones, they promised $365,000.

It is notable that another fundraising was being conducted at the same time on the lower level of Walden. This fundraising featured M.A.S.H, Hollywood actors, and stars from the TV shows. It began that afternoon with a celebrity tennis match. Their goal was to raise $250,000 for the Foundation for Diabetes.

Conroe raised $365,000 in one evening without support from outside of the city. The Montgomery County people had come through, but they were still not done. They managed to have financial assistance after the fundraisers at Walden, by buying 330 theatre seats for $200 each.

A big achievement was fundraising, but there was also a lot of work to be completed. The whole city has been behind the initiative. They shoveled trash and washed away the dirt that had accumulated over the years.

The Hicks Building was acquired to provide facilities for staging areas, wardrobe and prop stock, studios, and changing rooms for the Little Theater of Conroe. To allow greater variety in performing plays, this building was to be added to the Crighton Theatre building. The Hicks House was in poor condition than the Crighton building. Walls were dismantled, walls were patched, and people from all areas of the city shoveled out hundreds of dead birds, mice, spiders, roaches, and their droppings.

Over the last 15 years, to the delight of the people of Montgomery and the surrounding counties, over 100 stage plays by the Crighton Players and several professional shows by the Montgomery County Performing Arts Society and The Sounds of Texas Music Series have been performed at the revived Crighton Theatre.

The city of Conroe decided in 1999 that it was of the highest priority to rebuild the entire downtown. With all the freshly bricked sidewalks and new lamp posts, the renovation begins. The centerpiece of downtown will remain the Crighton Theatre. Building facades are being restored to make the “going to the theatre” experience much more enjoyable. crightontheatre.org- crighton theatre